Outstanding Polish jazz violinists, prize-winners and finalists of the Zbigniew Seifert International Jazz Violin Competition, will perform at Bucharest’s Green Jazz & Theatre Fest, at a concert streamed live on YouTube and on the event’s Facebook profile.

The Bucharest festival concert held on 4th September features winners of threeSeifert Competition editions: Bartosz Dworak, Mateusz Smoczyński, and Dawid Czernik. Since the pandemic prevents the musicians from travelling to the Romanian capital, the concert will be broadcast live from Poronin.

“Promoting the winners worldwide is – apart from the Competition itself – one of the key tasks of the Zbigniew Seifert Foundation. We are very pleased to be able to present our artists this year at, among others, the Green Jazz & Theatre Fest. Since their appearance in Bucharest has proved impossible due to the COVID-19 restrictions, the concert will be streamed directly onto the festival stage from beautiful Poronin, the home village of one of the prize-winners,” explains Aneta Norek-Skrycka, president of the Zbigniew Seifert Foundation, the event’s organiser.

The concert, to be held this Friday evening, features Seifert Competition prize-winners: Bartosz Dworak (1st prize, 2014), Mateusz Smoczyński (1st prize, 2016), and Dawid Czernik (special awards, 2020). These three excellent violinists will be accompanied by a rhythm section consisting of Max Mucha (bass) and Dawid Fortuna (drums). The event will be accessible free of charge on the Seifert Competition’s YouTube channel and Facebook profile, and can be followed live on 4th September at 8 p.m.

Mateusz Smoczyński graduated from Andrzej Gębski’s class at the Chopin Academy (now – University) of Music. Since 2017 he has taught a jazz violin class at his alma mater. He was the 2017 Jazz Violinist of the year in the Jazz Top poll of Jazz Forum magazine. He has performed with such celebrities as Branford Marsalis, Bobby McFerrin, Gil Goldstein, Richie Beirach, Glen Moore, Rabih Abou-Khalil, Zbigniew Namysłowski, Tomasz Stańko, Urszula Dudziak, Vladislav Sendecki, Leszek Możdżer, Jerzy Maksymiuk, Natalia Kukulska, Anna Maria Jopek, Monika Borzym, Grzech Piotrowski, and Sebastian Karpiel-Bułecka, and is featured on several dozen abums. Many-time winner of ‘Young Poland’ scholarships, he is the composer of ‘Adam’s Apple’ Violin Concerto, premiered in November 2018 by the NOSPR orchestra. With Joachim Kühn, Bronisław Suchanek, Janusz Stefański, and Bohdan Jarmołowicz, Smoczyński gave the premiere of Zbigniew Seifert’s Jazz Concerto. 2020 saw the release by the prestigious German label ACT Music of the CD Speaking Sound, recorded in a duo with Joachim Kühn. Smoczyński is also the leader of a quintet, member of New Trio, and co-founder of Atom String Quartet. In 2012-2016 he was the first violinist of Turtle Island Quartet in the USA.

Bartosz Dworak, a graduate from Henryk Gembalski’s violin class at Katowice’s Szymanowski Academy of Music, set up a quartet performing under his own name (2010) as well as the electric quartet Sandwich On The Floor. He has won solo first prizes or Grand Prix in such competitions as the Tarnów Jazz Contest (2011), the 37th Jazz Juniors, and the 16th LOTOS Jazz Festival – Bielska Zadymka Jazzowa (Jazz Blizzard in Bielsko-Biała). He feels perfectly at home in many genres, which has allowed him to take part in stylistically greatly varied projects. He has performed throughout Europe, as well as in Asia, North America, and Africa.

Dawid Czernik, native of Poronin, took his first violin lessons with the Podhale folk musician Tadeusz Szostak ‘Berda’. At age 15 he entered Cracow’s Chopin Music School, where he learned the double-bass and violin. Having developed an interest in jazz in the late years of secondary school, he graduated from the violin class at the Jazz and Popular Music Department of the Katowice Academy of Music and from the jazz double-bass class at Cracow’s Academy of Music. At present he is studying Jazz and World Music at Warsaw’s Chopin University of Music. In 2019 he won a prize for improvisation in the 1st Roby Lakatos International Improvisational Violin Competition in Budapest.

The project has been co-financed from the multi-annual governmental NIEPODLEGŁA Programme for 2017-2022, as part of the ‘Cultural Bridges’ grant programme of the Adam Mickiewicz Institute. 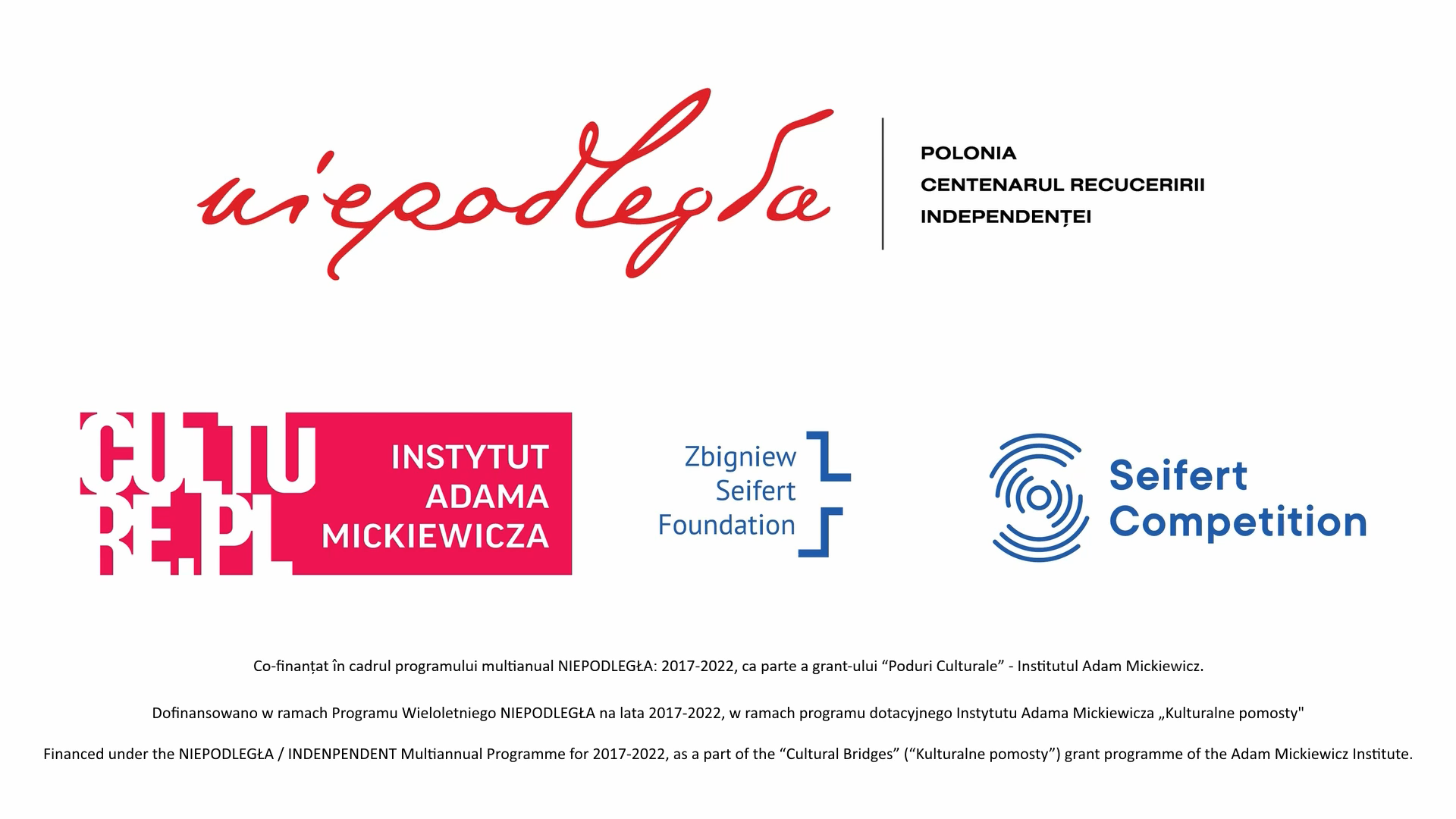 Here comes the forth edition of the Seifert Competition!