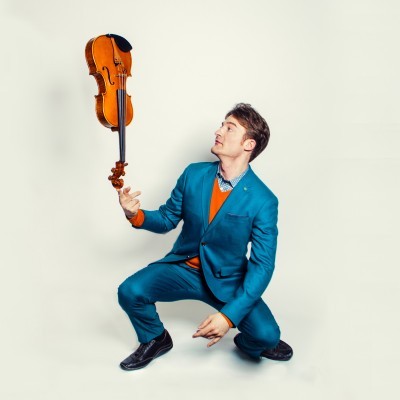 Benjamin “Benni” von Gutzeit – was born in Bochum, Germany and endowed with a strong musical heritage. His father, Reinhart, is a well-known music pedagogue and his mother
Gabriele a pianist. His sisters Susanne and Konstanze, like him, became professional string players. Benni began his viola studies at the age of four, starting on a very small violin that was fitted with viola strings. He received instruction from his father until age twelve when he became the pupil of esteemed viola player Emile Cantor of the Orpheus String Quartet. In 1992 and again in 1994, Benni took first place in the finals of the German youth Competition: Jugend Musiziert. His 1994 win was with the maximum possible points and led to a concert tour of Japan at the age of fourteen. Expanded by this experience his musical interests broadened and at age fifteen he developed a fascination for popular music and took up playing the electric bass in addition to viola. From 2001 to 2004 he studied at the Bruckner Conservatory in Linz, Austria under Jazz violinist Andreas Schreiber. This experience cemented his love for the genre and brought to bare his true forte. Jazz provided opportunities to maintain a high skill level on his instrument and to explore his creativity and self-expression.

In 2004 Benni moved to Holland to further his Jazz studies at the Conservatory of Amsterdam with Dutch Saxophone icons Ferdinand Povel and Jasper Blom and guitarist Jesse van Ruller. There he became an active part of the Dutch Jazz and improvised music scene. He performed with numerous formations including Elastic Jargon by Maurice Horsthuis, Starvinsky Orkestar by Martin Fondse, Laetitia van Krieken
Big Bang, the Celano-Baggiani-Group and Wicked Jazz Sounds. He performed at countless concert venues and festivals including the North Sea Jazz Festival. In 2010 he moved to New York City (supported by scholarships of the Dutch Fonds Podiumkunsten, the Deutsche Stiftung Musikleben, and the Kogel&Schmidt Foundation) and became the very first violist to earn a Master’s Degree from the Jazz department at the Manhattan School of Music. His teachers there included Phil Markowitz, Garry Dial, Chris Rosenberg and John Riley.
Benni has performed and recorded with many great musicians including jazz violinist Mark Feldman, electronic music virtuoso Matthew Herbert, cellist Ernst Reijseger, Bassist Linda Oh, pianist Cyrus Chestnut and Saxophonist Dave Liebman. Since 2012 Benjamin is the violist of the Grammy-winning jazz ensemble Turtle Island Quartet.