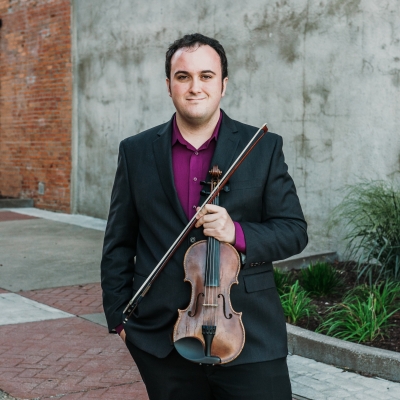 A native of Portland, Maine, Gabriel Terracciano has been playing the violin since the age of three. After eight years of strictly classical training, he discovered the jazz violin playing of Joe Venuti, Stuff Smith, and, later on, Zbigniew Seifert, who all changed his musical life (and life in general!) forever.

Gabe is a member of the two-time Grammy award winning Turtle Island String Quartet, and is also currently a member of several New York-based groups including The Avalon Jazz Band, The Hot Toddies, The Harmolodic String Band, Wet Electric, and Arthur Vint and Associates, in addition to leading his own bands. Gabe has been the recipient of multiple honors throughout his career, including Third Prize in the 2018 Zbigniew Seifert International Jazz Violin Competition.

Gabe’s recording debut was with legendary bassist Ron McClure on two albums for Steeplechase Records (Crunch Time in 2012, and Ready or Not in 2013), and has since recorded with the likes of John Scofield, Terence Blanchard, Adam Rogers, Lionel Cole, Glenn Crytzer, Dave Pietro, and Mike Rodriguez. His first solo album, “In Flight”, was released on January 31, 2020.

Along with his performing career, Gabe is also a committed educator and composer. He was an adjunct instructor in violin and guitar at NYU from 2016-2018. Gabe has a Master’s Degree in Jazz Performance from NYU, and completed his undergraduate studies in the Double-Degree program at Tufts University/The New England Conservatory of Music.