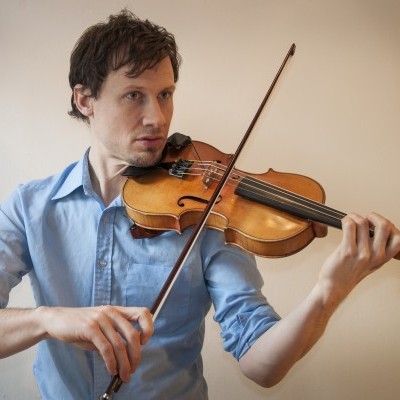 Florian Sighartner was born in 1980 in Linz in Austria. He started to play violin at the age of ten. At the age of 16, he entered the classical conservatory in Linz but soon abandoned the studies to focus on a course in sciences. Years later, he turned towards music again, yet this time with focus on folk and jazz improvisations. In this time he started to develop an independent and creative musical style allowing him to
form his own musical language and compose in it. From 2008 to 2014 he studied the jazz violin in the class of Andreas Schreiber in the Anton Bruckner Private University. He graduated with honours with his Matrioska Dreamteam Trio, a band he founded in 2012 together with Judith Schwarz (drums) and Sebastian Kuberl (double bass), playing mostly own compositions that combine many different
musical styles from jazz, via world music and rock, to chamber music. The trio released its first album Unusual Place in 2015.