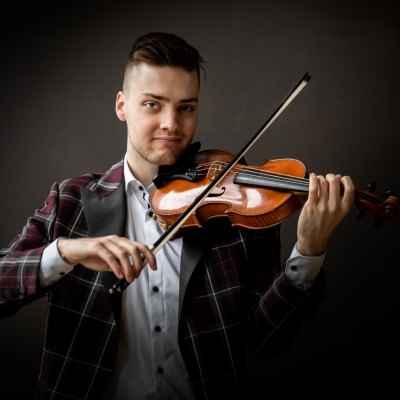 Since 2016 he is studying at the Estonian Academy of Music and Theatre with professor Mari Tampere-Bezrodny who he considers to be his best mentor in musical expression and technique of different styles. Kristjan’s playing style and music are strongly influenced by jazz guitarists Joe Pass, Django Reinhardt, and who he considers to be one of the greatest jazz violinists of all time, Stéphane Grappelli.

Kristjan Rudanovski started the path of a musician at an early age in Tartu, Estonia. His father’s inspiration led Kristjan into improvisational and jazz music. His first prize was won at a jazz competition when he was only 12 years old and since then he has been an outstanding talent who has also caught the eye of reviewers: “Such self-acknowledging, technical and captivating jazz violin has not been heard on our stages for a long time.” (2014, at Festival IDeeJazz).

Performances with the gypsy jazz string trio Titoks have taken him to a European tour of 11 concerts in Belgium, France, Germany, Luxembourg, and the UK. In Estonia, the trio has been a welcomed guest at many festivals and venues since 2016.