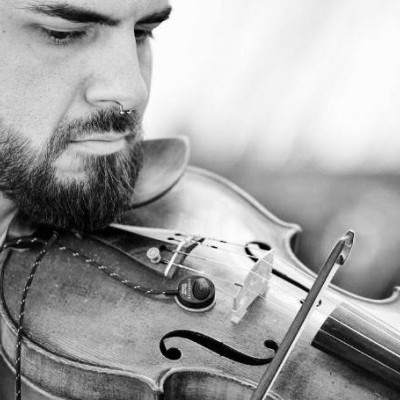 Francisco Palazón González Born in Madrid, violinist and violist. He obtains the bachelor’s degree of Classic Violin in 2009 at Real Conservatorio Superior de Música de Madrid. After that, he studies during three years with the Russian violinist Sergei Fatkulin, at the Fatkulin Academy in Madrid (2010-2013). After, he begins to be interested in new musical styles beyond the classical music. A few months later he
starts a new stage being part of the project “Ara Malikian y La Orquesta en el Tejado”. At the end of 2016 he begins to study with the jazz violinist Oriol Saña, and a year later is admitted in the Barcelona
Jazz Master of the Escola Superior de Música de Catalunya, where he is currently studying with Oriol Saña too. He has made several recordings like DVD Iolanta/Persephone with the Symphony Orchestra
of Teatro Real de Madrid, CD Hispania with the flamenco pianist Manolo Carrasco, and DVD/ CD 15 with violinist Ara Malikian. This album was nominated to Grammy Awards 2016.
He is violin soloist and founder of Manouche au Lait (gypsy swing quartet) in 2017 in Madrid. He has performed with the jazz and flamenco percussionist Guillermo McGuill, and collaborated also with the “Rafael Aguilar” Flamenco Dance Company, playing with the guitarist Miguel Linares. This year he has been awarded with the Anna Riera Scholarship, that belongs to Barcelona Jazz Master.