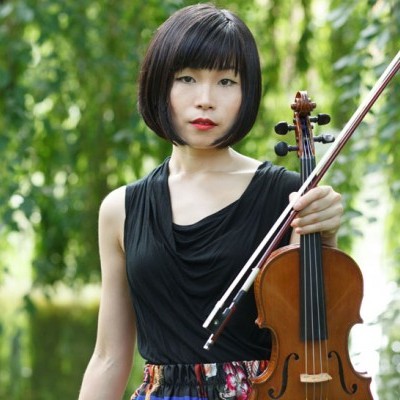 Tomoko Omura is among today’s leading voices in jazz violin. “Roots”, her debut album for Inner Circle, is a compelling tribute to her native Japan, featuring original arrangements of ten classic Japanese folk and popular songs. In the words of fellow violinist Christian Howes, “‘Roots’ is a tremendous accomplishment, and undoubtedly one of the most important and creative jazz albums produced by a violinist in recent history.” Strongly informed by the jazz violin tradition, her 2008 self-released debut album, “Visions”, is a collection of seven dynamic original pieces, each of which is dedicated to one of the greats of the instrument, from Stuff Smith to Zbigniew Seifert. Violinist Matt Glaser praises “Visions” as such: “Her playing here is uniformly amazing, with great ideas, great tone, perfect intonation and great feel…”. “Mark’s Passion”, dedicated to Mark Feldman, was awarded an Honorable Mention in the 2008 International Songwriting Competition. The release of “Visions” also prompted Strings Magazine to name Omura a “Rising Star” in 2009. Since moving to NY in 2010, Tomoko has performed with a wide range of musicians including Fabian Almazan, Vadim Neselovskyi, Paquito D’Rivera, The Mahavishnu Project, Aubrey Johnson, Tammy Scheffer, and Simon Yu’s Exotic Experiment. She is featured on Almazan’s Blue Note/ArtistShare debut recording, “The Rhizome Project”. She also performs regularly with vintage jazz band Carte Blanche, and has appeared on two of their releases.