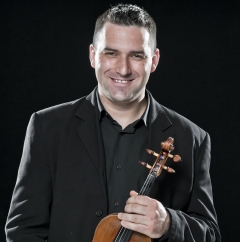 ​Dawid Lubowicz comes from Zakopane, from a family of rich music tradition. As a child he was a student of M. Galica and L. Brodowski. He graduated from the secondary music school in Rzeszów, from the violin class of Orest Telwach and from Frederic Chopin Academy of Music in Warsaw, from the violin class of professor Konstanty A. Kulka. He took part in many master courses with such virtuosos as: R. Baldini, M. Jaszwili, M. Ławrynowicz, Z. Milenković, W. Wiłkomirska, A. Jagodziński, M. Parkinson, G. Wittner.

He received awards at several festivals and contests, e.g. 2nd prize at the International Festival of Jazz Standards in Siedlce – 2004, special prize at the Jazz Scene of the Youth in Radom – 2004, he was the finalist in the International Contest of Krokus Jazz Festival in Jelenia Góra – 2004 and 2005 he was the winner of Warsaw Hopes Jazz Contest. With Atom String Quartet: Grand Prix Jazz Melomans 2010, Jazz Angel of Bielska Zadymka Jazzowa 2011, Fryderyk 2012 (Jazz Phongraphic Debut of the Year), Gold Fiddle of New Tradition Festival 2012, Fryderyk 2013 (Jazz Album of the Year).

He has been cooperating with Roma Music Theatre orchestra, Teatr Współczesny in Warsaw, The National Theatre in Warsaw and as arranger-composer for the Nova Opera in Bydgoszcz. He is a soloist in Christophe Voise’s project Missa Brevis. He has played in and created: Opium String Quartet, alTango, Lubowicz Jazz Quartet, East Wall Jazz Quartet and Atom String Quartet.