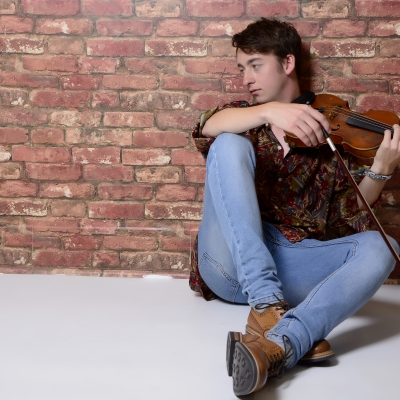 British violinist, singer and composer based in London, who seeks to combine violin techniques from his folk and classical background in order to create a unique way of playing jazz violin. As a teenager, Dominic spent two years with the National Youth Orchestra of Great Britain, before going to study classical and jazz violin at Chethamʼs School of Music. He then studied a bachelors degree in Jazz Violin at the Guildhall School of Music and Drama in London.

He has performed in a broad range of musical contexts, most notably with Bonsai - ʻone of the most talked about and critically acclaimed young bands on the UK sceneʼ. Heʼs also performed with Jonny Mansfieldʼs Elftet, Camila Mezaʼs Nectar Orchestra and indie rock band Blaenavon. Dominic has toured extensively across the UK and Europe in venues such as Ronnie Scotts, Love Supreme, The Royal Albert Hall, EFG London Jazz Festival, The Barbican, Heaven and Band on the Wall. In May 2020, Dominic has released his debut album ʻRole Modelsʻ which feature album artwork by Dutch artist Claudia Hoejenbos.