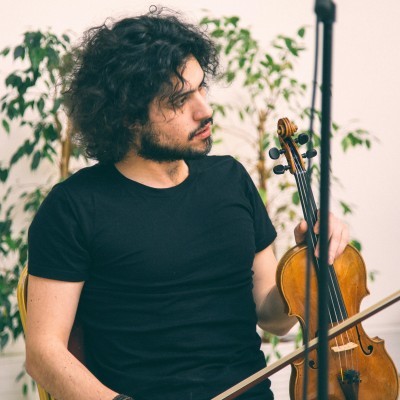 Mario Forte Born in Tlemcen in Algeria, he was introduced to making music at the age of three, and to violin a year later; the 22 consecutive years of musical training took him through five conservatories, including the National Superior Conservatory of Paris for Music and Dance, where he finished his studies in 2010. He took classes with Didier Lockwood, Glenn Ferris, Dominique Juchors, Ida Haendel, and many others. A fresh graduate, he was appointed associate professor of music at the University of Lausanne in Switzerland, where he also set up his orchestral project, the String Lab Ensemble. Based today in New York City, Mario Forte has lived in many different places and has played in around 30 countries the last decade. His projects emerge and develop along with his travels, and specific encounters give rise to a very eclectic career. In Morocco, he performed traditional Arabic-Andaluz music, and appeared in a TV Show on the national 2M channel with a Gnawa musician Chada Alhan. In Mexico, he performed around 40 concerts with many local jazz and contemporary musicians. In New York he works with a great deal of musicians, notably a Brazilian percussionist Sergio Krakowski, the violinist Mark Feldman, an Israeli clarinettist Anat Cohen, and many others. In France, where Mario recorded his first album with an ensemble of over 100 musicians, and performed at many jazz festivals with Richard Bona and in his band. In Switzerland, where
he leads the String Lab Ensemble project, he co-founded Artempo Festival in 2015 and has been its artistic director, and participated as composer and performer. In Austria, he has collaborated with bassist Georg Breinschmid, and, when joined by a Bulgarian pianist Antony Donchev, performed in trio. A composer for movies soundtracks and video performances, today beside his musical activities Mario Forte is in the process of making a movie translating his thoughts and personal vision of the contemporary situation in culture into moving images. Mario Forte is the winner of 3rd prize f the Zbigniew Seifert International Jazz Violin Competition in 2016.