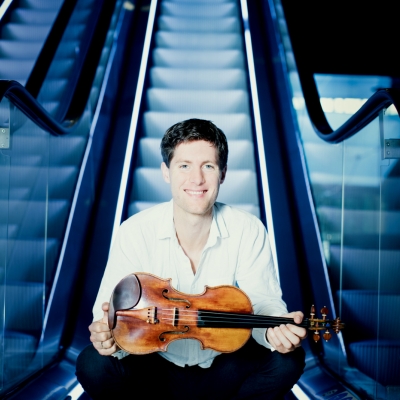 Violinist Johannes Dickbauer is renowned for his incredible versatility. Classically trained at the Curtis Institute in Philadelphia, he finds himself equally at home as a soloist, chamber musician, jazzer, folk musician, composer or arranger. In his role as Artistic Director of the festival „Jazz am Bauernhof,“ he presents a new concept annually with his band „Dickbauer Collective“. Since thier debut the ensemble has released two albums, and will appear this year with a number of special guests, including virtuosic French drummer, Patrice Heral. As a composer, he was commissioned to write a new work for Musikdorf Ernen 2015 (Switzerland). The piece, which blends classic, jazz, and improvisation, is scored for string quartet, piano, bass and saxophone and will be premiered in August 2020. Other highlights this season include performances of Bruch’s Scottish Fantasy with the Freistadt Symphony and concerts at the „Harriet and Friends“ music festival at Burg Feistritz (Austria). He also appears in various folks bands playing traditional Viennese, Austrian, Scottish, Irish, and Balkan folk music.