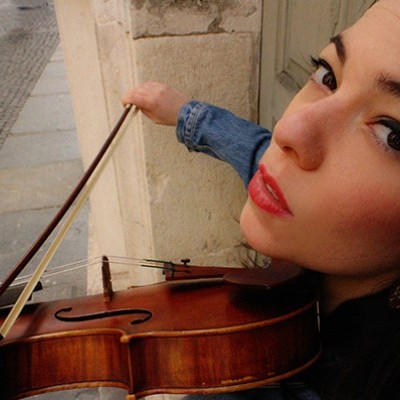 Cécile Delzant began playing the violin at the age of five and starts studying classical violin at the conservatory of Annemasse, her hometown. She continued her academic career in the following years at the
conservatories of Paris and Lille. In 2009, she is a student at the Royal College of Music of London in the violin class of Radu Blidar. Beside her studies Cécile explored other musical genres such as folk,
traditional French and West European music. For eight years she was a member of the folk band the Sextet à claques with which she make three recordings. In 2010 she gave up her classical studies to devote more intensively to the study of jazz and improvisation, she is admitted to the Conservatory Giuseppe Verdi of Turin. She studied with Italian jazz musicians such as Giampaolo Casati, Emanuele Cisì and Furio Dicastri. During her studies in Turin she attended master-classes with teachers of the NY’s Julliard Scool and the Wayne State University: Donald Vega, Chris Collins, Carl Allen. In 2016 she studied with the jazz violinist Rémi Crambes at the conservatory of Lyon. Cécile mainly plays jazz, improvised music, free jazz, performing with talented young musicians in many clubs, theaters and festivals in Italy: Jazz Festival
Torino, Ivrea Jazz Festival, Roero Jazz Fest, Novarra Jazz Festival. She collaborates in two projects of the Italian jazz pianist Emanuele Francesconi: Eclettic-Duo Nuit Française (winners in 2013 of the Barolo Jazz Contest) and Francesconi’s Strings Ensemble with whom she performs concerts all over Italy.
In 2016 she creates the Malgha Trio with two young jazz musicians: Manfredi Crocivera on drums and Mark Priore on piano and keyboards. She participated in many recordings and she is called to collaborate in
different musical contexts.