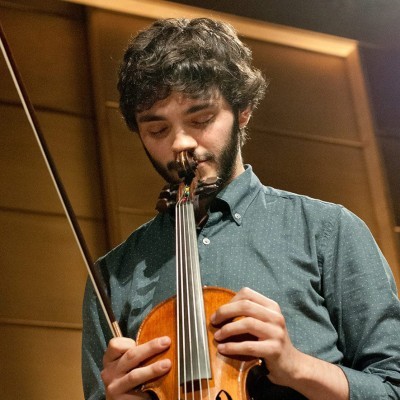 (Cambrils, Catalonia, 1989). Jazz violinist and composer based in Barcelona. He started playing the violin at age 8, studying at the public music school of his hometown. At age 15 he left his classical music studies and started exploring another instrument, the electric guitar, with which he opened to other music styles such as rock and pop. At age 18 he resumed his academic studies in music, but focusing on jazz and modern music. He graduated in jazz violin and modern guitar at L’Aula de Música Moderna i Jazz del Conservatori del Liceu (Barcelona) in 2010, and that same year he was accepted to ESMUC (Escola Superior de Música de Catalunya, Barcelona) as the first-ever jazz violin degree student throughout Spain. He is currently completing his studies at ESMUC, during which he has received an Erasmus scholarship to study at the Karol Szymanowski Academy of Music in Katowice (Poland), in 2013. He leads his own jazz quartet, Apel·les Carod Quartet, he is a member of the modern string orchestra Eclectic Colour Orchestra and the pop group Lecirke, and he collaborates with various bands and artists.