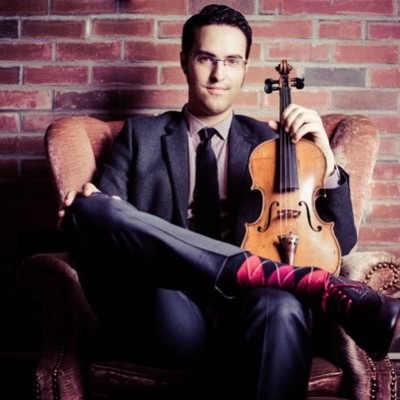 ​Talk to the abundantly gifted violinist and mandolin player Jason Anick and the phrase “ jazz without borders” will invariably come up. What the axiom means to Anick is a contemporary jazz that is stylistically inclusive in nature, a jazz that brings whatever it can to the party, unwilling to cut something out of the mix for fear of it not fitting prescribed boundaries. An inviting demonstration of the maxim in action can be found on Anick’s second album as a leader, Tipping Point (February 18, 2014). Utilizing both acoustic and electric mandolins in addition to his customary violin, Anick expands his musical horizons; those who associate his name with acoustic Gypsy jazz—as heard so convincingly on his debut album, Sleepless, in his work with the Rhythm Future Quartet, and with Grammy-award winning guitar virtuoso John Jorgenson—will now find that pigeonholing Anick is fruitless. The album’s title spells things out loud and clear: from this moment forward Anick’s own music is rooted in the here and now, a time when possibilities reign.

Blending Anick originals that openly incorporate the influences of mainstream jazz, classical, new acoustic music, Gypsy jazz, swing, and hard bop with a wide-ranging swath of jazz classics, Tipping Point declares that for open-eared members of the 28-year-old string master’s generation, musical exclusion is a dead end. What tie together the various strains of Anick’s vision are his extraordinary command of his chosen instruments and the spirited contributions of the like-minded players that accompany him on this musical journey.

“There’s a home in jazz for everything,” Anick states. “On Tipping Point I’m moving in new directions, trying different musical settings and types of composition. I wanted to show different sides of my
playing and my writing. I see all the diverse musical influences as being interconnected. And there’s beauty in interconnections.” To that end, Anick never allows his obvious virtuosity to overpower the music’s intent. “It’s not about displaying technique,” he states. “It’s about creating a soundscape, an atmosphere for listeners to enter into.”

One of the youngest instructors at Boston’s Berklee College of Music, Anick is considered “a rising star in the world of jazz violin and mandolin”- Downbeat Magazine. In addition to leading his own ensemble and performing with the Rhythm Future Quartet, Anick has been touring and recording with Grammy award-winning Nashville guitar virtuoso John Jorgenson since 2008 when he was recruited while still a senior at Hartt Conservatory. He went on to record on Jorgenson’s latest CD One Stolen Night, which was named one of the top 10 albums of 2010 by both the
LA Times and Acoustic Guitar Magazine.

Jason’s performances have taken him all over the world to China, Germany, the UK, Italy, France, and the Netherlands as well as renowned venues such as The Montreal Jazz Festival, Scullers Jazz Club, Yoshi’s Jazz Club, The Iridium, NPR’s Mountain Stage, and The Regattabar.