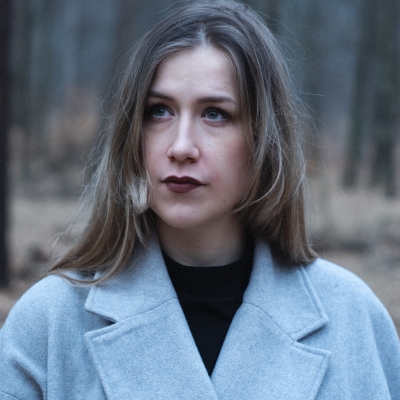 Amalia “Umeda” Obrębowska Improvising violinist, composer, leader of the Amalia Umeda Quartet. Amalia started playing the violin at the age of 7, but she did not feel fully integrated with this instrument many years later, when she began to consciously and independently set the path she wants to follow, write her own music and take risks during improvisation - she considers these activities to be key elements enabling on the development and broadening of horizons in music. Amalia Umeda Quartet was founded at the beginning of 2021. It is a group that fully reflects the artistic vision of the leader. Together with her, it is composed of Franciszek Raczkowski (piano), Michał Aftyka (double bass) and Michał Szeligowski (drums). During just over a year of activity, the band qualified for the international project Footprints Europe, thanks to which they will play a tour in Scandinavia in the second half of 2022; he played concerts as part of the Jazztopad Festival (the main hall of the National Forum of Music) and the Summer Jazz Academy (Wytwórnia club in Łódź); won a special prize at the Young Crocus Jazz Contest; and also released his debut album Nowoświt, co-produced by Program 2 of the Polish Radio.